“In every new city, a traveler rediscovers a part of his past that he didn’t think he still had: the strangeness of who you no longer are or what you no longer possess is waiting for you at the doorstep of strange, unpossessed lands”
Italo Calvino, The Invisible Cities

A walk through the most important monuments and piazzas of Parma.

The tour begins with a visit to the Pilotta Palace, the symbol of the Farnese family dynasty, and the extraordinary Farnese Theater inside of it, one of the rare examples left of Renaissance theater architecture, inaugurated in 1628 for the wedding of Odoardo I Farnese and Margherita de’ Medici. A pause is made in front of the monument dedicated to the great composer Giuseppe Verdi as an introduction to the Royal Opera House (seen from the outside only), the famous 19th-century opera house built at the express wishes of Marie Louise, Duchess of Parma and wife of Napoleon. Visit Piazza Garibaldi, site of the ancient Roman forum, and its medieval city hall. Walk down Via Cavour, a pedestrian-only street filled with boutiques and shops, to get to Piazza Duomo, where we will enter the Romanesque Cathedral that hosts the cupola frescoes painted by Correggio. The tour ends with a visit inside the splendid Baptistery, constructed with pink marble from Verona, one of the most important architectonic artifacts that attests to the passage from the Romanesque to the Early Gothic styles.

A walk through the historic city center, among the monuments, piazzas, and side streets filled with the old-style shops of Parma.

The tour includes entry into the Farnese Theater, the Royal Opera House, the Cathedral, and the Baptistery. The itinerary concludes with a stop that will initiate you in the flavors of Parma: a visit to a small specialty food shop where you will sample the world-famous products that inspired UNESCO to name Parma the first “Creative City of Gastronomy” in Italy, and learn about typical local products and their role as a vital link between town and countryside in Parma.

Walk through the downtown streets in order to view from outside the main monuments and piazzas of the city. Together, we will then choose one of the following places to enter: the Cathedral, Baptistery, Farnese Theater, or Royal Opera House.

PARMA UNDER THE STARS

A unique and alluring evening walk around the city: an itinerary through the most important streets and piazzas of Parma. Includes a stop for an aperitif and tasting of local specialties.

PARMA AND ITS DUCHESS

An enchanting voyage into the 19th-century court of Marie Louise, Duchess of Parma: art, theater, fashion, jewelry, and even the perfumes, candies, and sweets that take her name.

This tour begins at the emblematic 19th-century court piazza designed by the ingenious court architect Nicolò Bettoli. Visit the Royal Opera House that Marie Louise commissioned, a temple of opera music and revolutionary public opera house that brought about a cultural revolution in the city. Visit the Glauco Lombardi Museum in a noble palace that contains historical objects related to the Duchy and to the adventures of Napoleon Bonaparte, the husband of Marie Louise. A final stop in the legendary “Parma Violet” shop, where you can find the celebrated perfume created by Lodovico Borsari in 1870: Parma Violet, a reminder of the city’s Duchess who so loved this flower. An optional stop can be made in one of the city’s great pastry shops so as to sample the delicious cake known as “The Duchess of Parma” in honor of Marie Louise’s sweet tooth.

PARMA AND THE OLTRETORRENTE NEIGHBORHOOD

A cultural tour in a symbolic neighborhood of Parma: the hot-blooded and legendary Oltretorrente, backdrop to antique court dramas, passageway for the faithful on their pilgrimages, barricade and refuge for revolutionaries and soldiers, and last but not least, home of the great orchestra director Arturo Toscanini.

The tour begins at the renaissance Pilotta Palace, built by the Farnese Dukes, and then moves into the Ducal Park, where we will see the Ducal Palace from the outside.

We will then arrive at the gates of Oltretorrente, where we will stop to see the Birth House of Arturo Toscanini (from the outside).

Visit the Annunziata Church, built in 1566 and a reminder of the centuries-old presence of the Franciscan Order in this neighborhood.

Piazzale Picelli and the Church of S. Maria del Quartiere: a stop that includes a view of the magnificent cupola by Bernabei, and the history of the 1922 Barricades against the Fascist Squadrons.

The Old Hospital and the Church of Santa Croce (outside): the last part of our tour will take us down the old Roman road, the Via Emilia, an ancient thoroughfare for merchants and pilgrims, along which the medieval porticos of the Old Hospital are located.

A walk through the most important piazzas of Reggio Emilia:

Piazza Grande (Prampolini), featuring the imposing cathedral with its unfinished facade from the 1500s, the Baptistery, the Bishop’s Palace, and the City Hall, where we can visit the “Tricolore” Room, where the three-colored Italian flag was born in 1797.

Piazza San Prospero, which we reach from the Piazza Grande by way of the “Broletto”, a covered medieval street facing the Basilica, founded in the 10th century and dedicated to the patron saint of the city.

Piazza of the Theaters, with the Ariosto Theater from the 1700s, dedicated to the great poet Ludovico Ariosto, and the “Valli” Theater, with one of the most beautiful neoclassical facades in all of Italy.

We conclude by way of Via Garibaldi, visiting the Sanctuary of the Madonna della Ghiara, built in 1597 on the site of an important miracle that took place in front of a fresco of Mary. 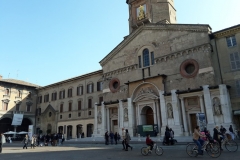 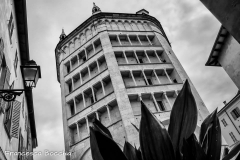 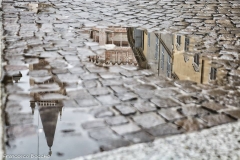 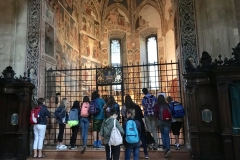 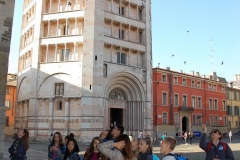 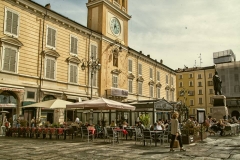 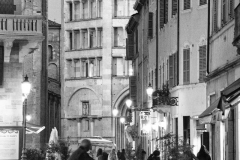 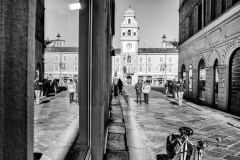 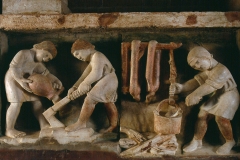 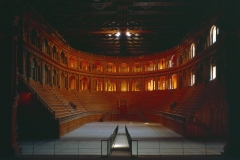